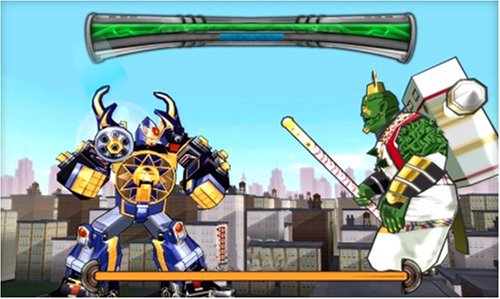 The Red Ranger paused for a moment to observe his surroundings: shiny, metal walls, neon lights and large windows, through which he could see the towering skyscrapers of the metropolis. The sky was blue but his mission was not a walk in the park. He had to stop his enemies from getting the time crystals and messing with history, preventing the Rangers from existing.

In each time zone they had gathered special forces to stop him and this place was no different: soldiers materialized out of nowhere and attacked him immediately. He punched and kicked, knocking them down swiftly. One of them fired his laser gun. The Ranger ducked, then jumped over his enemy and slammed him on the ground. A huge armored guy charged but once again the Ranger's agility saved him. He grabbed the closest soldier and tossed him on the giant, gaining enough time to pull out his pistol and fire a charged blast that disposed of the remaining opposition. He moved ahead.

A half transparent platform hovered above his head. He bent his knees and jumped, landing on its smooth surface. A large door was built many feet higher, meant to hinder further progress.  He leaped towards the opposite wall, bounced off of it and smashed the door with a dashing air kick. A secret room was revealed, full of goodies, including a yellow bolt. Now he could replenish his energy and perform his devastating super attack. Soon, he would find the boss commanding all those mindless minions and start a nice conversation with him.

Power Rangers Super Legends is a side scrolling platform/ beat’ em up, based on the famous TV series. In case you ‘ve never heard of them, the Rangers are a team of super heroes who use impressive martial arts to protect Earth from hostile aliens. I admit I did not watch the series when I was a kid, so I cannot say how close the game is to the show. However, I enjoyed it thanks to its tight controls, variety of moves, colorful graphics and cool sounds.

There are several locations, including a traditional Japanese mansion on the mountains, ancient desert ruins, a high-tech factory and the ordinary alleys and rooftops of a city. In each stage, your objective is to reach the exit but frequent energy barriers block your path until you clear all foes. Enemies are humanoid and attack you in small groups; beating two or three of them simultaneously is satisfying. 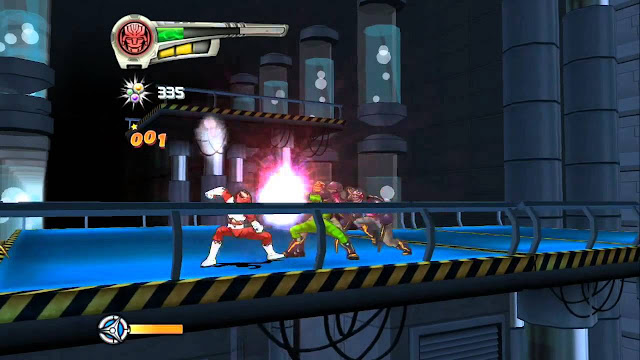 There are environmental hazards too, sush as flame jets or chasms. Occasionally you face a boss; if you beat them him, or her, he transforms into a huge giant, forcing you to become enormous too, by merging with all the Rangers. The gameplay changes accordingly and you need to press the right buttons at the correct moment to win.

When you die your score is reduced and you are revived on the spot. If you can run out of points you will die permanently but this never happened to me. As for the game’s length, there are few stages which are not very long. You can try to improve your score after each level and there are various Rangers to choose from, however, all characters play the same and there is no option for a higher difficulty.

To sum it up, Power Rangers Super Legends is a good arcade game. Combining style with fast action and cool, strong heroes it reminded me of another platform game on PS2, Kim Possible. The few hours I spent on it were worth it. 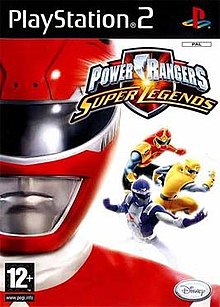